Let’s first describe the main task we will be handling; continuity. Continuous problems are tasks that has no specific terminal state, therefor will go on forever. As simple as it sounds, it is not a piece of cake to tackle the issues it brings with itself. Some examples could be the stock-market, where there is no end and you keep getting data. Or as book suggests access-control queuing task (Example 10.2).

I will follow a simple format so that we all can stay on the same page and everything is clear cut:

Why is discounting not applicable for continuing tasks?¶

First of all, we should know that discounting works well for tabular cases. The issue we will be talking about rises when we start to use approximations.

We have a sequence of episodes that has no beginning or end, and no way to clearly distinguish them. As the book suggests, we have the feature vectors to maybe have a use of, but then the issue of clearly seperable arises. We might have two feature vectors that has no to little difference between them, which won’t be possible to be able to distinguish.

Since we have no start point or end point, and since there is no clear line in between episodes, using discounting is not possible. Well it actually is possible. But it is not needed. Actually using $\gamma = 0$ will give the same results as any other one. That’s because the discounted rewards are proportional to average reward. That’s why instead we will only use average reward. Here I will put the proof that both will results in the same order (discounted and without discounting): 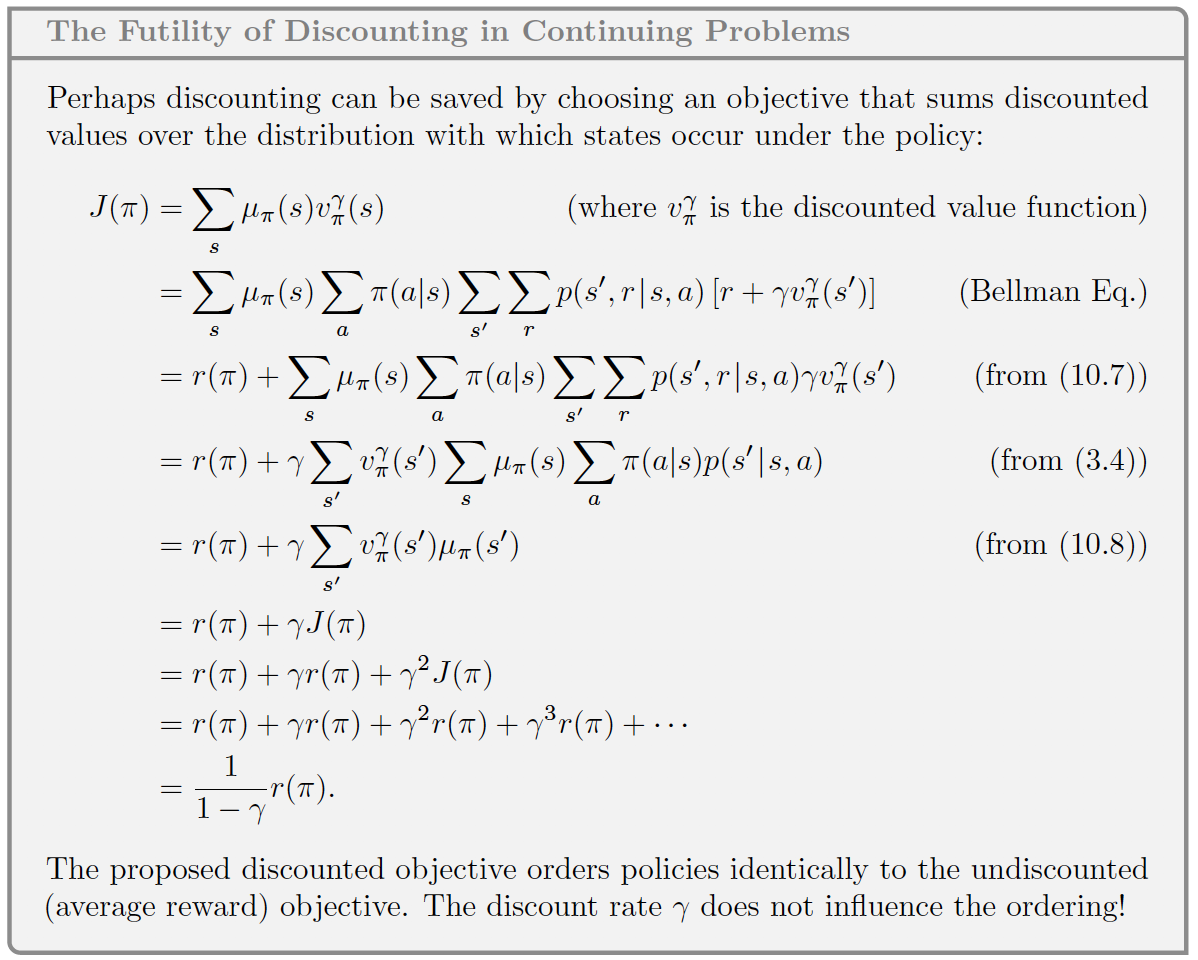 The main issue with discounting in the approximation cases is that, since we have states depending on the same features, we do not have the policy improvement theorem anymore. Which was stating that we can get the optimal policy, just by changing all the action selections to the optimal ones for each state. Since we could choose the probabilities for one state without effecting the others it was pretty easy to handle. Now that we lost that property there is no guaranteed improvement over policy.

As Rich puts it “This is an area with multiple open theoretical questions”. If you are interested.

Average reward is a pretty popular technique used in dynamic programming. Later on included into the Reinforcement Learning setting. We use average reward for approximated continual setting as we discussed above. Without discounting means that we care about each reward equally without thinking of if it occurs in far future etc.

So we already saw the formula for $r(\pi)$ but we didn’t actually see how it came to existence or what all those things mean. $$ r(\pi) \doteq \lim_{h\rightarrow\infty} \frac{1}{h} \sum_{t=1}^{h}\mathbb{E}[R_t|S_0, A_{0:t-1} \sim \pi] $$ Let’s explain what’s happening here. We are assuming we have $h$ number of rewards, we are summing expected value of all the rewards given the first state and the action trajectory following the policy $\pi$, and we are dividing it to $h$ to get to the average of these rewards. So we simply had $h$ many rewards and we got the average. Then; $$ = \lim_{t\rightarrow\infty} \mathbb{E}[R_t|S_0, A_{0:t-1} \sim \pi] $$ Since I have the expectation inside the summation, we can actually simplify the summation with the division. We do have to put $t\rightarrow\infty$ to ccorrect the formula, as we will have number of samples approaching infinity. Next jump on the book seems fuzzy, but when you open it up it is extremely easy to see how it happens.

In practice we will be using moving mean to calculate average reward.

Well, I don’t really have much to add. If you read the Semi-Gradient SARSA post, this is mostly just changing the update rule for the continuous setting. That will be the change for $G_{t:t+n}$.

and we will use another step size parameter $\beta$ to update the average reward value. Here is the pseudocode: 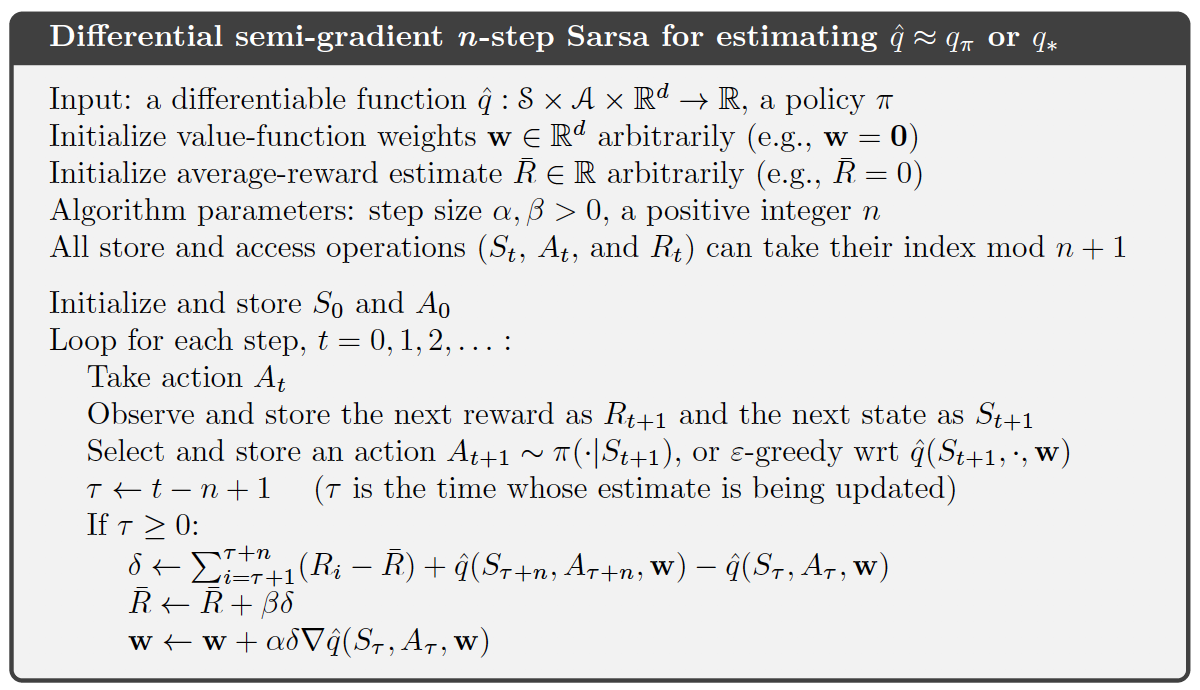 And here is my implementation of it, which does not require much explanation I assume:

It is basically almost the same with the previous version. We are first checking if we have more elements than $n$ which means we need to remove the first elements from the storage. Then we have a check which sees if we have enough elements, because we won’t be making any updates if there is not at least $n$ elements in the trajectory. The rest is the same update as in the pseudocode.

Again we run an experiment using the same settings as before which results in a high varience learning, thought it does learn which is the point here right now 😄. 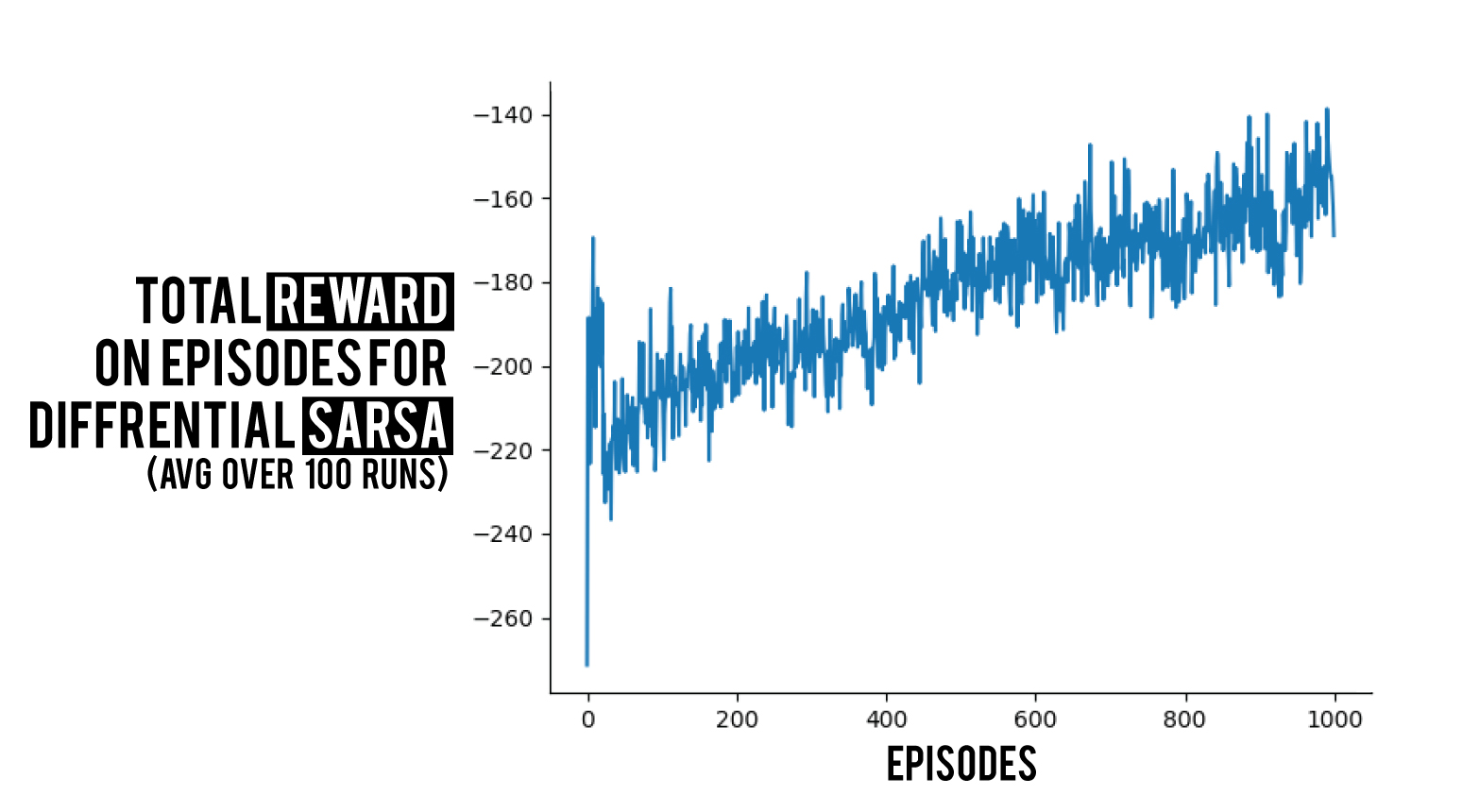 I have a blog series on RL algorithms that you can check out. Also you can check BetterRL where I share raw python RL code for both environments and algorithms. Any comments are appreciated!